Don’t let the smile fool you. Anyone that knows me will tell you I’m stubborn. It is one of the best and worst things about me. When someone tells me that I cannot do something, I get an uncontrollable desire to prove that someone wrong. The satisfaction I derive from achieving the impossible is innate: I was a caesarean baby, born 3 weeks early with complications. Without stubbornness, I quite literally wouldn’t be here.

That same stubbornness was required last year when I contracted a post-op infection. Once again, I was in a life or death or situation and came through it. This time I wasn’t unscathed. Physically, my leg was a mess (Warning: graphic content ahead – Ed) 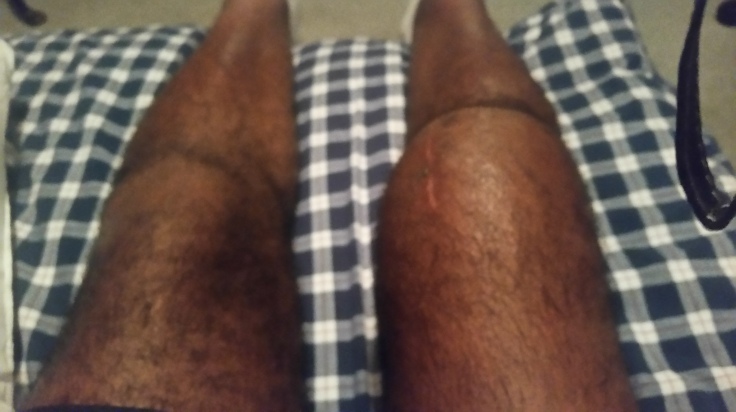 It needed further surgery to remove the scar tissue that had built up to improve mobility. Once that had been done, physiotherapy, rehabilitation and strength and conditioning started in earnest. What people don’t realise is that, regardless of the injury, rehabilitation is a mental as well as physical process. It is painful. Like, a human making a sound like a car revving its engine painful:

At first, it isn’t mentally taxing because you make gains like “hey, I can walk with 2 crutches!”; “hey, I can walk without a single crutch!”; “hey, I can walk up and down stairs!”. Eventually those gains slow down and the monotony and sadness of working hard without tangible benefits kicks in. Expectations and goals have to be revised downwards with each MRI that shows negligible progress. I’ve gone from “I’ll play rugby again” to “hopefully, I won’t end up in a wheelchair”.

I’ve taken up cycling and boxing in a bid to make conditioning less boring (I’m not the type of person that loves the gym); I’ve spent lots of time practising pull ups and other upper body exercises in an attempt to compensate for a weaker knee; I changed my life in some pretty extreme ways (leaving teaching, going back to university and starting a website to name 3), hoping to improve my mental health and took on a lot of small challenges to keep my mind occupied during my rehab. Focus on the process, I reasoned, and the rehab will go by more quickly.

Today, my physiotherapist, an amazing man named Richard (who does valuable charity work, which you can find out about here), looked at me and told me there was nothing more that he could think to do, beyond what I was already doing, to improve my leg. I’ve been working with him for nearly 2 years and we have chatted about topics as varied as Peppa Pig, sports and politics. Outwardly, I attempted gallows humour, but inside I was hurting. For once my stubbornness hasn’t been enough to overcome a problem that seems insurmountable.

Wallowing in pity is really, really tempting. So is quitting. My stubbornness has let me down and I feel like I deserve a break.

People would empathise with me if I quit. I really believe that.

There’s no such thing as winning or losing. There is won and there is lost; there is victory and defeat. There are absolutes. Everything in between is still left to fight for…

So, I’m not quitting. I might have down days, a lot of down days, and I fully envisage pain (because, believe it or not, strapping electrical pads to your legs hurts), but I’m too stubborn to quit. Because when I think about it, being told that there’s nothing more that can be done, that it’s impossible – well, I was born for that.

One thought on “I’m Stubborn”