2018. July. Water is trading at $80 a barrel. Hysteria is high and delusion is the new normal. The heat addled the brain of many in England who believed that football was coming home. Those that weren’t interested in football had run out of things to say, no longer able to converse about the changes in the weather.

As I write this, I have escaped to the cooler climate of Mexico, where they still have rain (for the children that may have stumbled across this, rain is where water used to fall out of the sky). Alas, they won’t let me stay: the number of climate refugees has meant that my request for asylum was flatly denied.

We used to call it a heatwave. Before that we called it summer. We scoffed and laughed at those that called it global warming.  We did not have a consensus on climate change. We knew we had time to sort out any problems in the future.

Bitterly, I laugh at the idea of a future. If we didn’t learn after the climate war in Syria, we didn’t deserve to have a future.

Pearls were clutched and laments were heard when the historic buildings started collapsing. ‘How were we to know?’ was the cry.

If only someone had warned us. 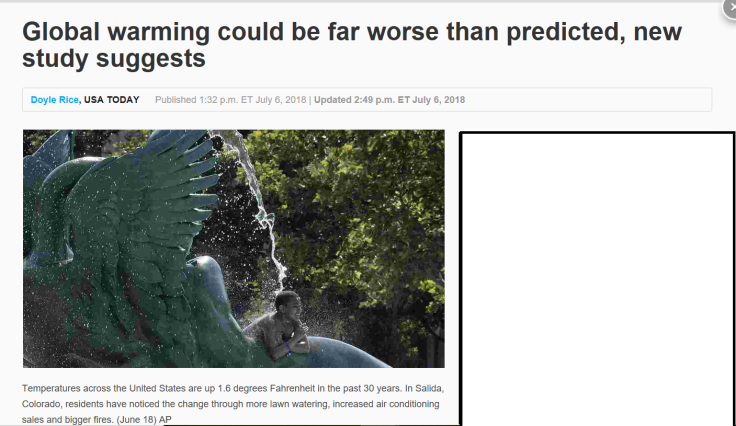 It was difficult to know who to believe. There was the 97% of all scientists on one side saying that global warming was real and human made, but then there were presidents and TV shows that made it seem like a 50/50 issue. Elected officials versus science: who would you trust?

In the end, our prevarication proved to be fatal. Mass migration from the worst affected drought areas, combined with an increasing fear/xenophobia/racism in the few remaining areas with water was a deadly combination. The outbreaks of violence were frequent, the tragedies too numerous to count. And when it wasn’t violence causing tragedy, it was disasters. When Beijing collapsed on itself, many said it was an act of God. An investigation exonerated God, the cause being subsidence, accelerated by the rate at which the aquifer beneath it was pumped.

Maybe it’s a good thing that my application to stay in Mexico was denied. Today’s big story is that a newly opened mall has partly collapsed in Mexico City. I’m sure it has nothing to do with climate change. Let’s check in with Laura Parker, writer for National Geographic, and see what she has to say:

Beijing isn’t the only place experiencing subsidence, or sinking, as soil collapses into space created as groundwater is depleted. Parts of Shanghai, Mexico City, and other cities are sinking, too. Sections of California’s Central Valley have dropped by a foot, and in some localized areas, by as much as 28 feet.

My mind drifts to some of my favourite memories: the days when I could turn on a tap and cold, clean water would gush out in torrents of glacial beauty; my childhood days when we had 4 seasons, not 1; when we had rivers, lakes and brooks with water in them…I force myself back to reality, the past being too painful to reminisce about for long. I wipe the sweat from my eyes and try to decide if I can wait another hour before I have my daily water ration. I open my curtain and look out to the barren land and oppressive sun. Wearily, I pull the curtains shut and lie down for a nap. Perhaps I will wake up and this will have all been a dream…