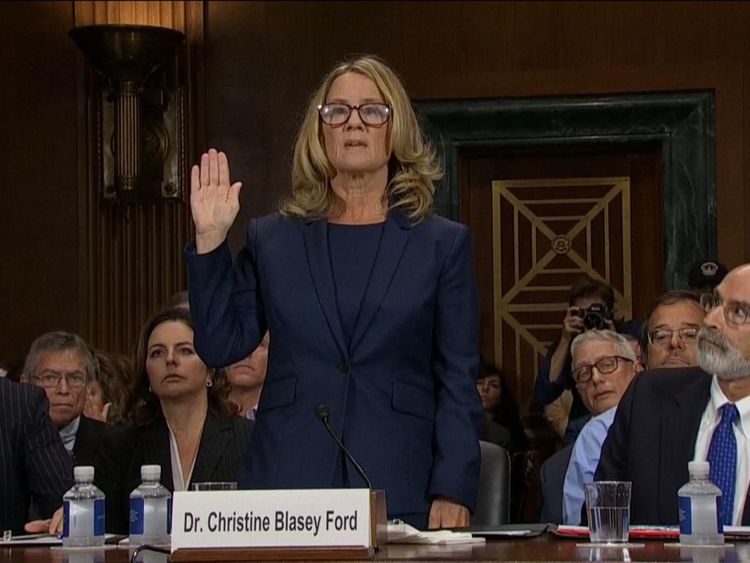 I’m following the Senate hearing and trying to get this in before the recess finishes. This was written in real time.

Dr Christine Blasey Ford looked nervous. She had right to be. Chuck Grassley painted them both as victims, saying that “Both [she and Brett Kavanaugh] had been treated” badly over the last couple of weeks. He also mentioned civility (GRAB EM BY THE PUSSY!!!!), before launching into what seemed like a spirited defence of Judge Kavanaugh, painting Senator Feinstein as the real villain in the story, which I have written about here.

One part of Dr Ford’s opening statement stood out to me. She said:

This is how I met Brett Kavanaugh, the boy who assaulted me, Grinding on me. He tried to grope me and take off my clothes. He was very inebriated.

“We saw that she was not moving, while he was moving a lot,” Arndt said in Swedish. “So we stopped and thought, ‘This is very strange.'”

These are the words of Karl-Fredrik Arndt, one of two Swedish students whose intervention startled and stopped Brock Turner, leading to his arrest. I’m writing this and scrolling Twitter at the same time and there are 2 prevailing themes. The first:

Both Brett and Mark were drunkenly laughing during the attack. They both seemed to be having a good time. Mark was urging Brett on, although at times he told Brett to stop. A couple of times I made eye contact with Mark and thought he might try to help me, but he did not.

Since he isn’t there, we can’t possibly know. The other main idea coming out is this:

Think about it. Dr Ford alleges that Kavanaugh got on top of her and groped her. “He had a hard time because he was so drunk”. Brock Turner was highly inebriated when he was apprehended. In both stories it was luck that prevented something worse potentially happening: for Dr Ford, Judge jumping on the bed and knocking them off and for Turner’s victim, the Swedish students that stepped in to help. Many Republican commentators have tried to brush off the allegations, saying that it happened a long time ago, as if that should protect Kavanaugh from scrutiny. Turner’s father said “[The sentence] is a steep price to pay for 20 minutes of action out of his 20 plus years of life.” I could go on, but the point is depressingly clear. The thing that Brock Turner was convicted for seems very similar to the thing that Kavanaugh is accused of.

I wrote about Brock Turner this year and made the point that the Judge was a fellow Stanford alum. This hearing is why Brock Turner’s case matters. People empathise with people that remind them of themselves. It is difficult to break a cycle of sexual assault and violence when lawmakers are allegedly an integral part of that same cycle. When senators draw equivalency between the victim and the accused, they minimise the crime. I struggle to believe this is inadvertent.

There’s a lot of “boys will be boys” defences of Kavanaugh. If that’s the case, that’s the problem. I’ll finish with this tweet:

Brock Turner: “we couldn’t let one incident ruin his future.”

Brett Kavanaugh: “we can’t let this incident ruin his career.”

Bill Cosby: “we can’t punish someone with such little time left.”

What is the magic age where men can be held accountable for their actions?

We should believe people that make accusations of sexual assault. I’ve given the statistics before, but they need repeating. I normally try and end with a powerful statement, but, today, it’s not needed.